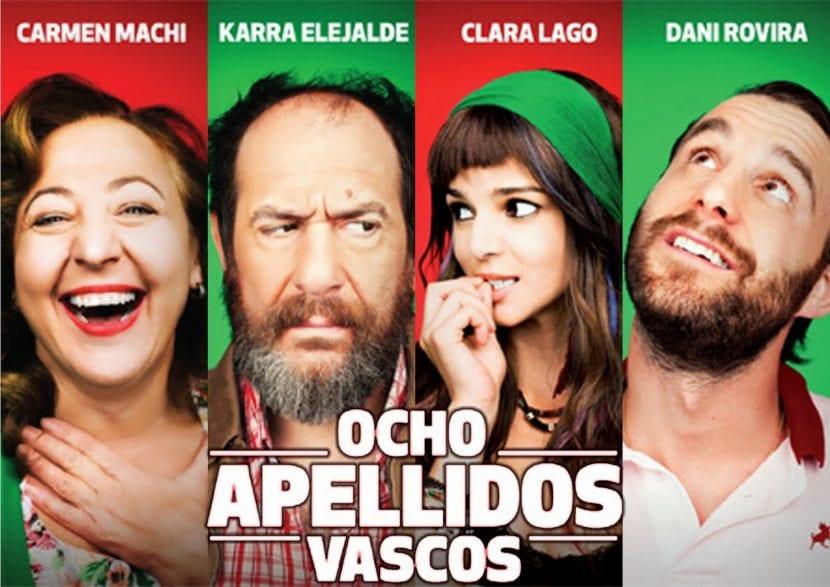 Going to the movies is one of the most popular diversions all over the world. Watching a movie to disconnect from reality, relax and forget about the world is one of the great pleasures.

The Spanish comedy cinema, with its ups and downs, has maintained during the last years a high production rate, although at times it seems that the domestic public turns their back on him.

Comedy movies are one of the most popular and perhaps the only genre that never goes into decline or bumps. People will always need to laugh.

This is the highest grossing film in Spanish filmography, with more than 56 million Euros in collection. A fresh story starring Dani Rovira, who plays a Sevillian in love who pretends to be Basque.

Converted into a "franchise”, The second installment moves to Catalonia, sprinkling the story with more ethnographic and independence humor.

This is the third most profitable Spanish in history, with an estimated 36 million euros. Second on the list is super production Impossible (2012) by Juan Antonio Bayona, starring Ewan McGregor, Noemi Watts and a then unknown, Tom Holland.

The Heifer by Luis García Berlanga (1985)

One of the Spanish comedies most popular of the 80's, offers a humorous vision of some events of the Spanish Civil War. Beyond satire, the film (in the words of its director), takes a critical position of the role played by some spheres in society once the conflict is over.

The stories of the shy guys who have always been in love with their best friend since childhood, make everyone laugh equally, regardless of the place, or the language. Starring Mario Casas and Amaia Salamanca, this was the most watched film in Spain in 2009. Two years later the director Carlos Therón shot a sequel: Brain drain 2: now at Harvard, but without succeeding in attracting the public's attention.

Women on the Verge of a Nervous Breakdown (1988)

In the late 80s, Pedro Almodóvar would begin to cement his legend with this acid comedy starring, among others, two of its fetish actors: Antonio Banderas and Carmen Maura.

The great adventure of Mortadelo and Filemón by Javier Fesser (2003)

Of course the most famous characters in Spanish comics they couldn't stay out of movie theaters. This first experience in real action left quite satisfied to Francisco Ibáñez, creator of the comics, although some fans were not entirely pleased.

Es the seventh highest grossing Spanish film, with a collection that exceeds 22 million Euros, enough to shoot a sequel: Mortadelo and Filemon. Mission: save the earth, directed by Miguel Bardén and released in 2008. The 50th anniversary of the publication of chapter number one was celebrated. It did not achieve the repercussion of its predecessor.

The Other Side of the Bed by Emilio Martínez-Lázaro (2002)

Third film by the Madrid director on our list of Spanish Comedy Movies. And this, like the Basque and Catalan surnames, too it worked very well at the box office. Half musical, the protagonists of the story sing songs by Kiko Veneno and Los Rodríguez, among others, to spin a story of convoluted and frustrated romances.

To the best hollywood parodies style, (ScaryMovie), Spanish Movie makes fun of the blockbusters of Spanish cinema, such as REC, The others, out to sea o The Pan's Labyrinth. Critics ended up divided in her opinions, but the public turned to see her. As a curiosity, Leslie Nielsen (protagonist of Grab it however you can and other comedies more like that), had a cameo in this movie.

Produced with Canada, this comedy had to save some legal problems before landing commercially in theaters. Starring Anne Hathawey and Jason Sudeikis.

Like "satanic comedy " This film is cataloged, which made its director famous in Spain and in much of the world, Alex of the Church. Safe Santiago would also reach stardom after starring in this movie.

Torrente, the stupid arm of the law by Santiago Segura (1998)

Confirmation of stardom for Segura, who also directed and wrote this heavy humor police satire. Torrente would become a saga of 5 films, the last two shot with 3D technology.

As you can guess from the title, it is an LGTB-themed comedy, spiced up with some drama. He received the support of both the public and the specialized critics.

Second Spanish film to win the Oscar for Best Film in a Non-English Language, after Begin the Beguine (1982) by José Luis Garci. A fresh story, of sentimental entanglements, set on the eve of the proclamation of the Second Spanish Republic.

The longest running comedy on our list is a critique of Spanish society in the middle of the Franco regime. Many still do not explain how this tape circumvented the strict censorship of the factual regime.

The executioner by Luis García Berlanga (1963)

Another classic comedy from Spanish filmography, Critical vision of García Berlanga's cinema of certain aspects of the Spain governed by Francisco Franco, and that inexplicably was filmed and premiered in the middle of the dictatorship.

Based on the comics created by Manuel Vásquez Gallego, Spanish cinema also has its James Bond, although at times he seems closer to Johnny English ...

De la Iglesia recruited the famous Carmen Maura to head the cast of this comedy with terrifying elements, very much like the director of The Day of the Beast, although without being a "Satanic Comedy".

Full path to article: Give me leisure » Movies » Comedy » The best Spanish comedies in the history of cinema