Although many might consider it a counter-sense, using music for yoga is a widespread custom.

Professional instructors of this ancient practice use soft and pleasant harmonies, in order to facilitate concentration among their learners. AND many of the more experienced practitioners also resort to certain sounds and measures, to build the best environment for your exercise routines.

Some archaeologists claim to have found evidence that yoga was practiced in Asia as early as the seventeenth century BC. This thanks to a stamp discovered in Pakistan where an anthropomorphic creature appeared sitting cross-legged.

But beyond this specific data, whose interpretation in any case is debatable, for Hindu teachers yoga is simply eternal. It always existed and it is not capable of marking a start date on the calendar. These days, there are many different options, and using music for yoga is extra motivation.

Yoga is divided into several aspects, all pursuing a common central goal: the perfect body-mind communion. These are:

The use of music for yoga goes through some considerations to take into account. Two of them are the personality of each practitioner and the objectives to be pursued.

Although the ultimate goal of yoga is to achieve the perfect balance between body and mind, this does not close the door to individual goals.. Some of them can be disconnecting from the stress of the day to day, resting the mind or "turning off" the thoughts. It can also be a necessity to just calm down and relax.

Environmental or natural sounds are usually tools widely used in the granting of these objectives.. Although for many people the perfect picture of a yoga session includes a paradisiacal place under the open sky, where you can breathe fresh air, this is not always possible. For those who do not have day-to-day access to these types of environments, simulating them is a very valid option.

The sea, the rain, the howling of the wind or the chirping of birds, are some of the most used sounds. 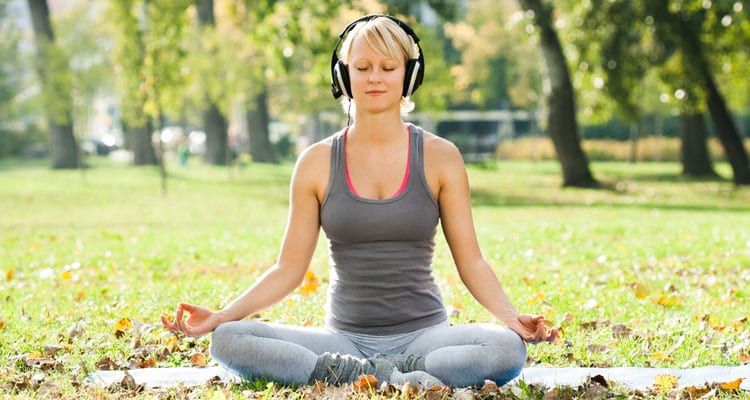 Certain types of tonalities inscribed within the New Age musical are also used as music for yoga.. It is true this categorization is quite broad, but quiet chords, which start from the imitation of certain natural sounds, are those in common use.

However, For some people, these types of rhythms can become a source of distraction. The same goes for a musical genre that has been related to concentration and relaxation: classical music.

Some specialists consider that this distraction is due to the fact that this type of music is usually very entertaining in itself. Part of the exercises associated with yoga and meditation focus on isolating yourself from your environment and concentrating on your inner self. If the music is so pleasant that a lot of attention is paid to it or its chords are followed, the objectives are not reached.

These two platforms are an obligatory reference to know the musical preferences of the public from all over the world. It also includes rankings on what kinds of songs are the most used as yoga music.

Among the preferred topics are: introspecting by Pete Kuzma, in my tribe de Eccodek and Still in time by DJ Drez.

Full path to article: Give me leisure » Music » Download music » Music for yoga