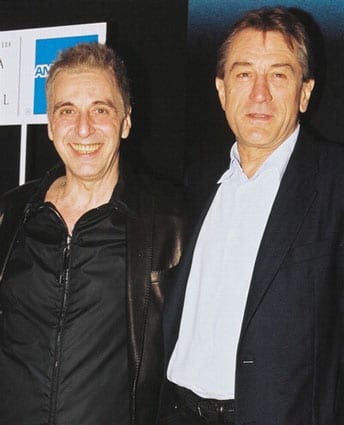 Robert De Niro and Al Pacino will work together for the third time, this time in the film "Righteous Kill." The news, announced yesterday in the Cannes film festival, includes the director Jon Avnet as director of this clash of the titans. The two worked together for the first time on The Godfather II (1974), the second part of the Francis Ford Coppola saga.

But in that hectic shoot they never shared the scene together since De Niro, 64, played the character of a young Vito Corleone while Pacino, 67, was the son of the mobster. The two actors had to wait until 1995 when "Fuego Contra Fuego" (Heat) brought them together in the same film and in the same time space.

"Righteous Kill" producer Avi Lerner said what? "andin our movie they are together all the time«.? With a budget of about fifty million euros,? The filming of a plot will begin in August where Al Pacino and De Niro play two policemen on the hunt for a murderer.

Full path to article: Give me leisure » Movies » Movie actors » From Niro and Pacino, back together