The board games Escape Room They are based on real Escape Rooms, that is, sets or scenarios with different themes and rooms where a group of participants is locked up who must solve a series of puzzles and find clues to be able to leave the room before the end of the game. weather. A game that enhances cooperation, observation, ingenuity, logic, skills, and the strategic capacity of each one.

The success of these rooms has also popularized the board games of this type, especially after the pandemic, since many of these rooms closed for security, or have limitations in terms of the groups that can enter. So you can play from the comfort of your home, and with the whole family or friends. There are them for all tastes and ages ...

The best Escape Room board games

Among the best Escape Room board games there are some titles that attract special attention. Incredible games that immerse you in a setting with great detail and where you will have to squeeze your brain to try to solve the challenges: 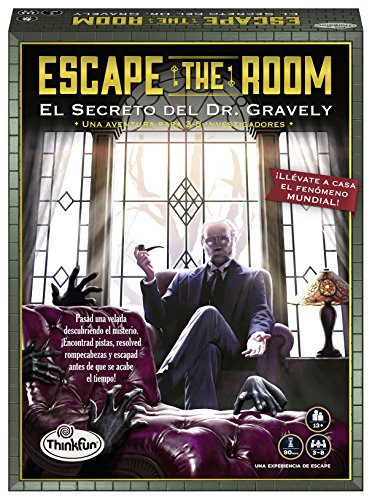 This game is for the whole family, as it is pure fun and is well suited to all ages from 13 years. In it you must work together with the rest of the players (up to 8) to solve riddles, puzzles, and find clues to try to solve the dark secret of Doctor Gravely. 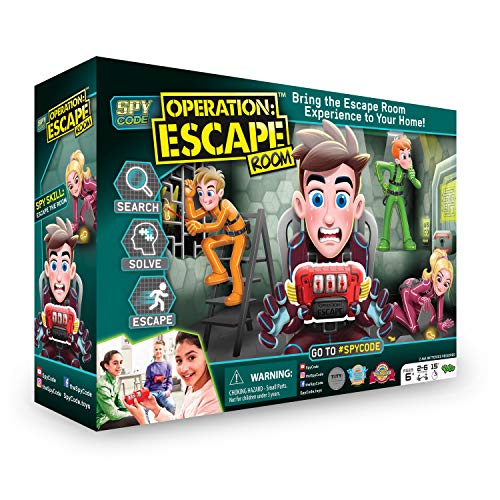 A game designed for children from 6 years of age. It has 3 levels of difficulty, and a series of roulette wheels, keys, cards, cage, timer, test decoder, etc. Everything to interact and solve the skill challenges of the key, strategy quiz master, wheel of luck, etc. 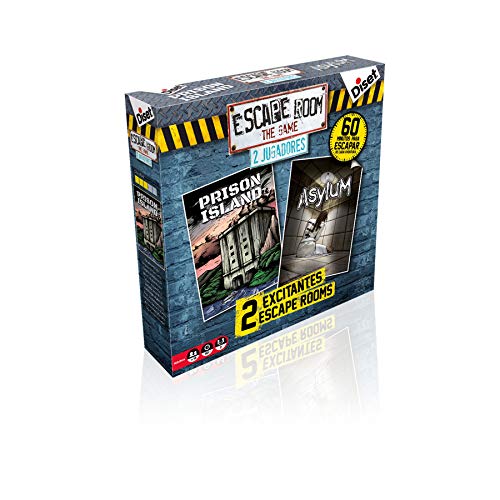 An Escape Room board game for all ages from 16 years. It can be for 1 player or for 2 players, and the objective will be to solve a series of adventures and puzzles, hieroglyphs, riddles, sudokus, crosswords, etc. Con has 2 different 60-minute adventures: Prison Island and Asylum, and an extra 15-minute adventure called Kidnapped. 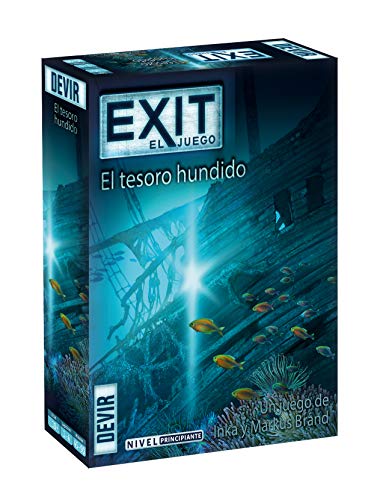 An Escape Room board game that everyone can participate in, from 10 years of age and 1 to 4 players. The objective is to immerse yourself in a fantastic journey to find the great treasure that has sunk in the depths of the sea in the Santa María. 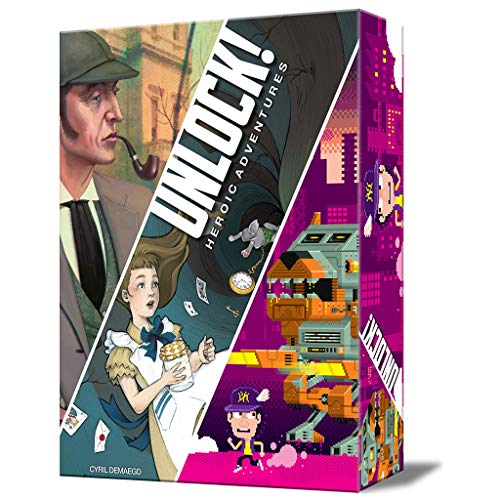 This Escape Room type game introduces a card game, with the possibility of playing from 1 to 6 players, and suitable for everyone from 10 years old. The estimated duration to solve this game is about 2 hours. An adventure in which cooperation and escape will be key, having to solve puzzles, decipher codes, etc. 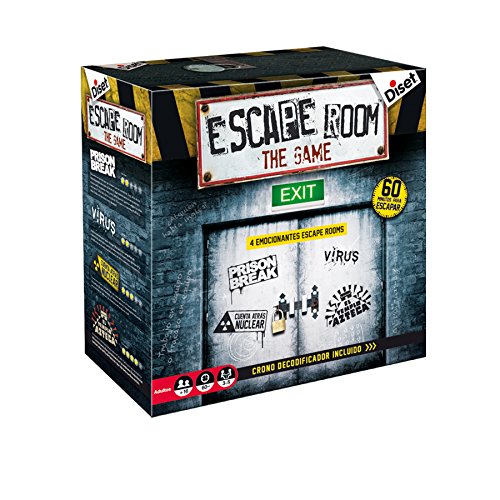 This Escape Room board game contains 4 different adventures that can be solved in less than 1 hour. With riddles, hieroglyphs, riddles, sudokus, crosswords, etc. With different levels of difficulty and with the possibility of playing from 3 to 5 people, from the age of 16. As for the scenarios included are: Prison Break, Virus, Nuclear Countdown, and The Aztec Temple. 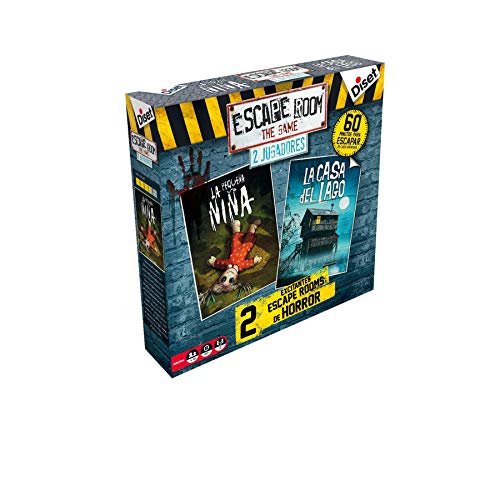 Another edition of this series of games for over 16s and for 2 players. Challenges, like the one above, can be solved in less than 60 minutes. And in this case, 2 possible horror-themed adventures are included: The Lake House, and The Little Girl. You dare? 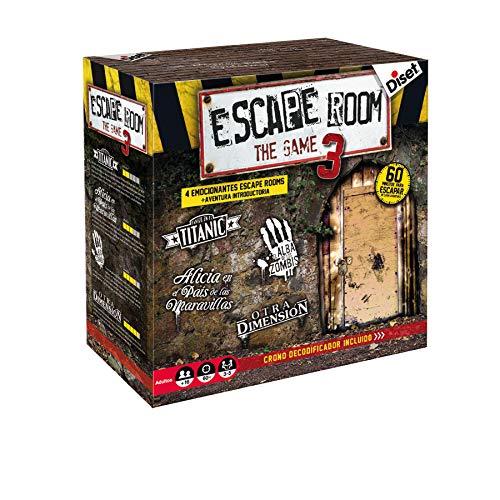 Another of the most interesting packs, with the possibility of playing from 3 to 5 people from the age of 16. It includes everything you need for the 4 1-hour adventures it contains: Dawn of the Zombies, Panic on the Titanic, Alice in Wonderland, and Another Dimension. As you can guess from their names, of various themes.

Escape Room The Game: The Jungle 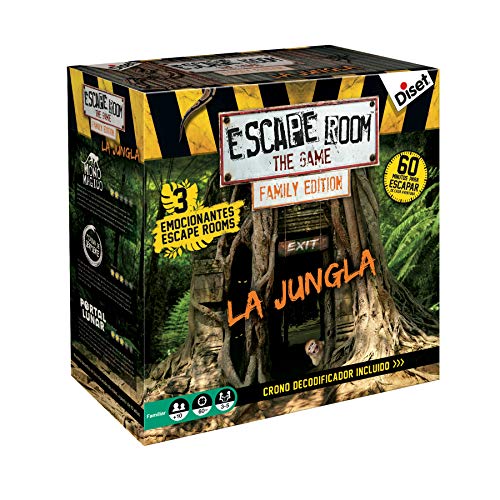 If you are looking for more and more content with this type of game, here are 3 other new adventures of less than 1 hour. With a multitude of challenges and with various levels of difficulty. In this case, the scenarios included are: Magic Monkey, Snake Sting, and Moon Portal. It is also suitable for 3-5 people and +16 years. A Family Edition to have fun all together. 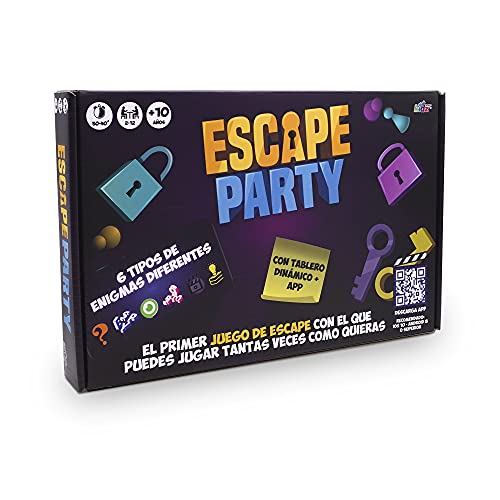 An Escape Room type game designed for children from 10 years of age. It can be played many times, and it always surprises. With a multitude of questions and riddles to try to get the keys and escape the room before the rest. It has more than 500 questions: 125 riddles, 125 general knowledge, 100 riddles, 50 math problems, 50 lateral thinking and 50 visual challenges. 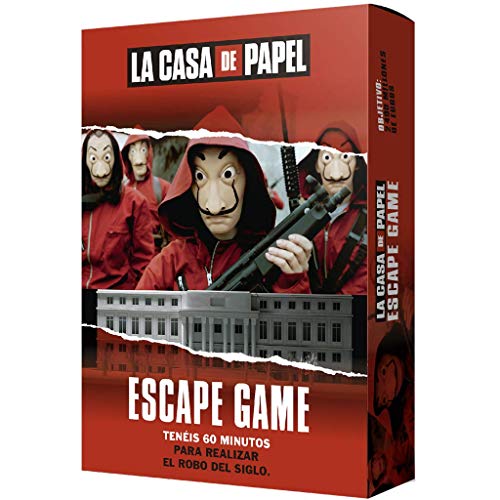 If you like the Spanish series that triumphs on Netflix, La casa de papel, Escape Room has also been played. In it you can be one of those chosen to make the robbery of the century at the National Mint and Stamp Factory in Madrid. All the characters and stages of the plan that will have to be followed to obtain the loot.

Escape The Room: Mystery in the Observatory Mansion 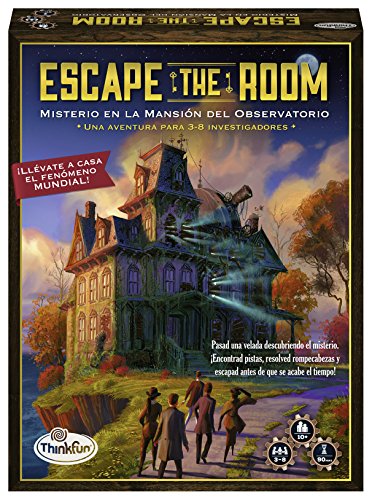 This other game in this series allows up to 8 players to participate, aged over 10 years. Here players will venture through the rooms of this mysterious mansion to solve a mystery, the disappearance of an astronomer who worked there.

Buy Mystery in the observatory mansion 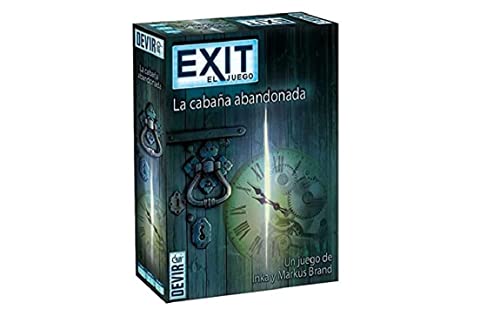 The setting for this game is an abandoned cabin, as the name suggests. All surrounded by mysteries. A fun Escape Room board game of advanced difficulty. For ages 12 and up, and with the possibility of playing alone or with up to 6 players. It is estimated that it would take between 45 and 90 minutes to resolve. 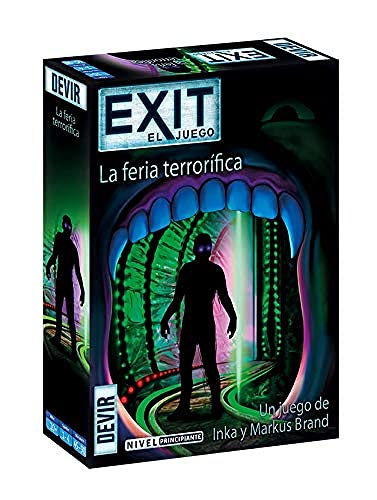 From the same previous series, you also have this other Escape Room based on a terrifying fair, for those who prefer the horror genre. It can be played from 10 years of age, and with 1 to 5 players. It is not an easy one, and it can take between 45 and 90 minutes to solve it. 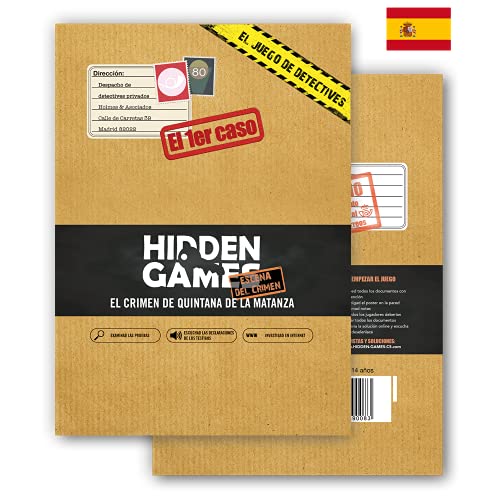 There are several cases of this Hidden Games series, one of which has been translated into Spanish is this first case. Feel like an investigator in this case. A different game, with a new concept that makes it more realistic. In it you must examine the documents of the evidence, verify alibis, and unmask the murderer. They can play from 1 to 6 players, over 14 years old, and it can take between 1 hour and a half and 2 and a half hours to solve it.

Exit: Death on the Orient Express 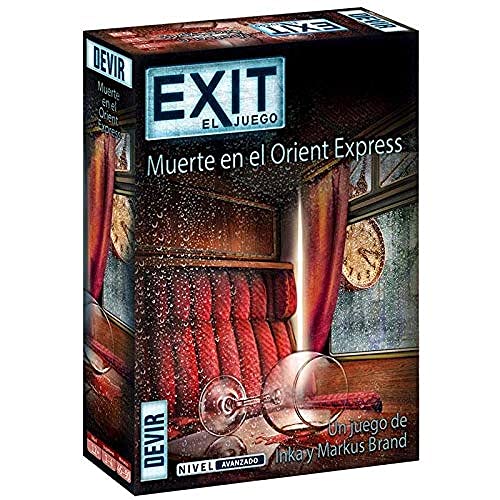 Novels and movies have been made around this classic title. Now also comes this Escape Room board game in which 1 to 4 players aged 12 and over can participate. The genre is a mystery, and the setting is the mythical train, in which a murder has been committed and you must solve the case.

Buy Death on the Orient Express 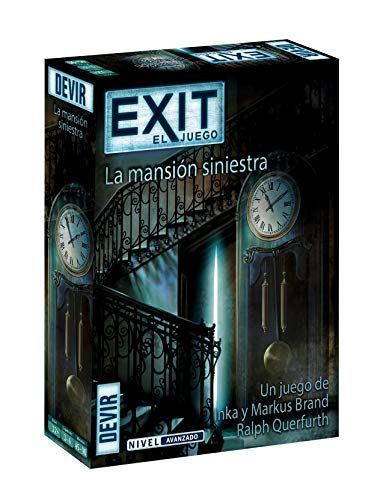 Yet another title to add to the Exit series. Designed for over 10 years old and 1-4 players, with the possibility of solving the challenges after 45 to 90 minutes. The story is based on an old mansion in the neighborhood. A run-down, mysterious and lonely place that was abandoned. One day you receive a note in your mailbox asking you to go there, where you meet your friends. The stately interior and the well-preserved decoration are surprising. But suddenly the door closes and all that remains is to try to figure out the meaning of the note. 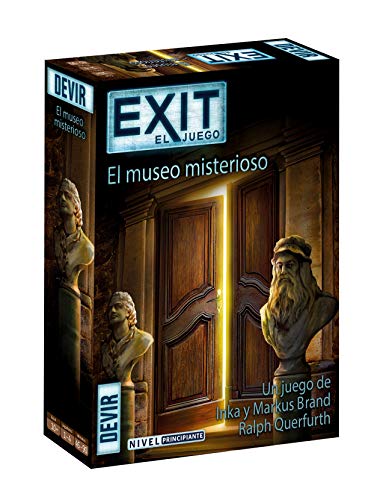 This Escape Room takes you to a museum where you hope to find works of art, sculptures, statues, relics, etc., like any other museum. But in this museum nothing is what it seems, and you will have to try to escape, since you will be trapped in this mysterious building. 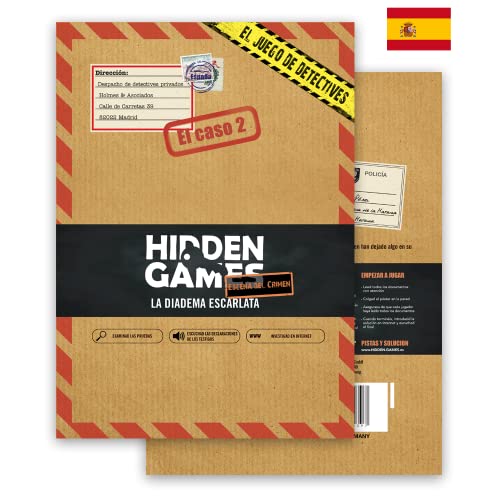 Similar to the first case, but in this case you get into an investigation into a theft of an heirloom from a rich family of nobles. It was stolen from the Greater Borstelheim museum and the author left a mysterious message. Get into the commissioner's shoes and find those responsible for this theft. 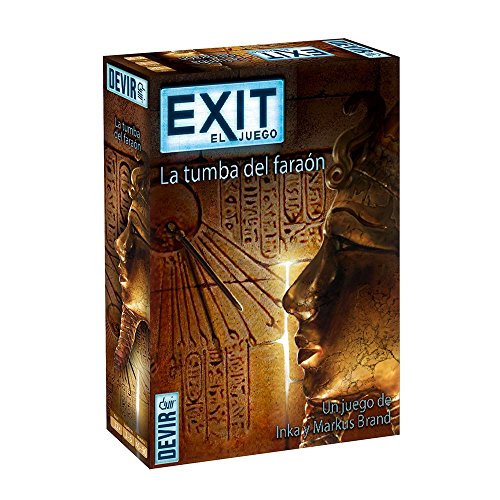 This game allows 1 to 6 players aged 12 and over. It is specially designed for those who love the adventure and history of Egypt. The story is based on a trip to Egypt for vacation, where you visit all kinds of amazing places, such as the tomb of Tutankhamun, a place surrounded by mystery and almost magical. As you enter its dark and chilling labyrinth, the stone door closes, and you are trapped. Will you be able to get out?

Buy The tomb of the Pharaoh 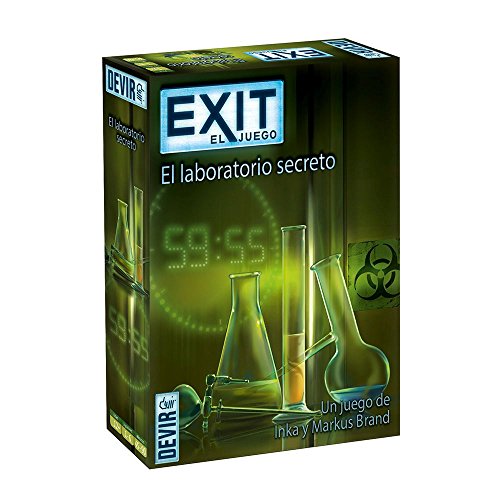 This other title takes you into a story in which you and your friends decide to participate in a clinical trial. Once in the laboratory, the place seems empty, and there is an atmosphere of mystery. A gas begins to emanate from a test tube and you begin to feel dizzy until you lose consciousness. Once you regain consciousness, you see that the door to the laboratory is closed and has trapped you. Now you have to solve the riddles to get out ...

Exit: Robbery in the Mississippi 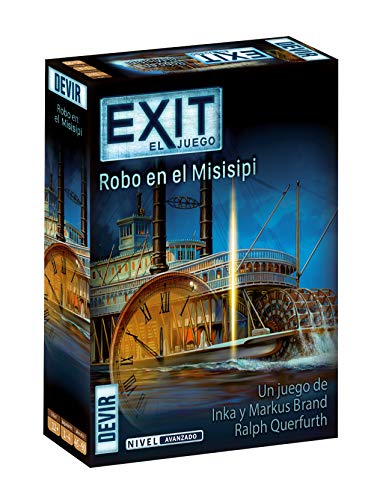 Another advanced level game, for the most professional Escape Rooms. It can be played alone or up to 4 players, with ages of more than 12 years. A vintage title, set in the famous steamboats, and with a robbery in between. A great alternative or complement to the Orient Express.

Buy Robbery in the Mississippi 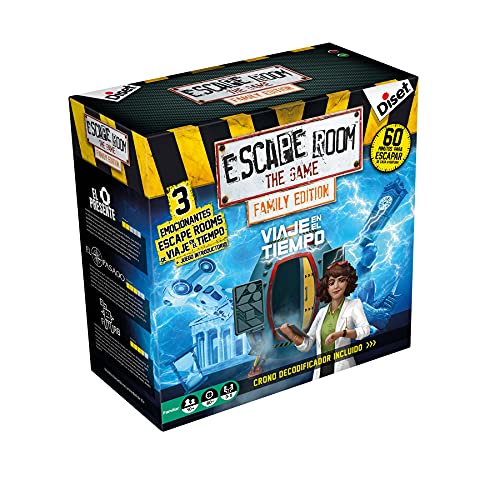 This Escape Room board game is for all ages from 10 years old, and can be played by 3 to 5 players. A title loaded with riddles, hieroglyphs, sudokus, crosswords, riddles, etc., that can be solved in less than 1 hour. In this case, it comes with 3 new thematic adventures focused on time travel: The past, The present and The future. 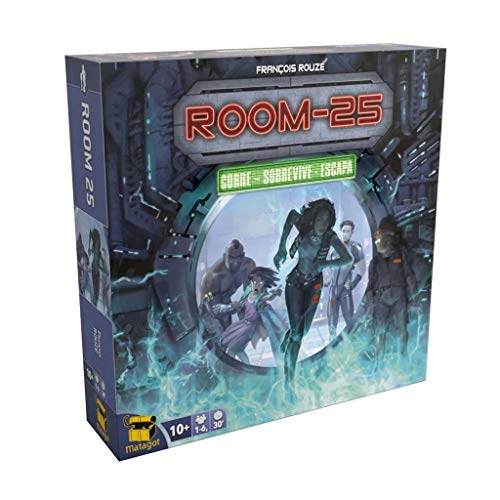 A title for players from 13 years old. A whole adventure based on science fiction, in the near future where there is a reality show called Room 25 and where certain red lines are crossed to try to get an audience. The candidates will be locked in a 25-room complex with dangerous and unexpected effects that will put them to the test. And, to complicate the escape, sometimes there are guards involved among the prisoners ... 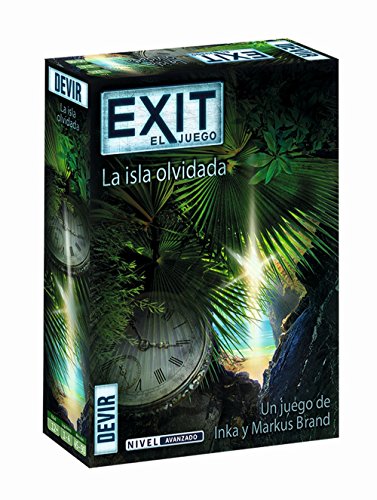 This is the other great contribution of the Exit series. An Escape Room style adventure for over 12 years old and with the possibility of playing from 1 to 4 players. The challenge can be solved in approximately 45 to 90 minutes. In this game you are on an island that has little to do with paradise, but when you realize it it is too late and you will have to escape in an old chained boat that will have to be released ...

How to choose the best Escape Room game

When choose an Escape Room board game, it is important to look at several features, as with other games:

In addition to this, it is also important to know some details of The manufacturers of these games, and find out what each one has specialized in, to determine which one can best be adapted to your needs or tastes:

Full path to article: Give me leisure » General » The best Escape Room board games